Mid-week Motivation || The Universe has a Plan Right?? 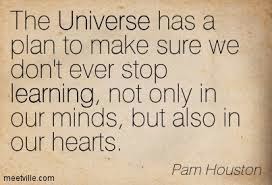 I thought I would start writing some mid-week motivation posts. I thought that they might help for those days when your waiting for Friday to come or you just generally feeling like giving up and going to bed. This one was inspired by something I saw recently on facebook. It was a short video showing us just how big not only our universe but other universes actually are as-well. Basically I think the jist of it was we are very small haha.

I personally am not very religious ( and I don't want to get into a big debate about it. Each to their own. Live and let Live is what I say! ) but I do believe the Universe has got to have a plan in some shape or form.

Everything happens for a reason! Thats what my mam has always said to me and I couldn't agree more! Ill give you reasons for this belief! I always find when bad stuff happen that if I wait long enough Ill be able to find out the reason why.... there are some exceptions to the rule for some people but I try not have regrets as I believe that if everything had not fallen into place the way it has it would not have led my here or to where I am going to be in the future.

Does anyone remember that episode of How I Met Your Mother when ted is trying to catch a plane for a job Interview but misses it and the reason why can all be traced back to picking up a penny?? well its kinda like that. I believe sometimes random things happen in your life that at the time may not even seem significant but lead to a greater goal or purpose.

One example although I have (many) Is about a year and half - Two years I broke up ago with somebody. It wasnt the worst break-up in the world but as you can imagine I was quite upset. Im fine now and believe me so much better off but, thats beside the point. At that time I was upset, lonely and feeling generally a bit lost. I was in the same job I had been in for years and he also worked there, college was over and not even complete, didnt know what to do with myself really just going on day by day. Then one night I decided I would look online for a tutourial on a smokey eye. I wasnt even sure if one exsisted... I know, so naive! I was going out for a night out that weekend and I want to rock a sexy smokey and decided I needed some tips. I happened upon Nicole Guerrieros page and once I watched her Dewy Skin & Bronzey Eyes Tutourial. I then continued to watch other videos she had created and then I decided to look for other YouTubers. From that night on I was hooked. I always loved make up and many people had always commented how I should be in the beauty industry but I always told them beauty was my hobby and I didnt want to ruin it by making it my job!!
Soon however watching beauty gurus became my evening routine had sparked my passion for all things beauty once more. So I decided to look up beauty courses in college online. I was just in time for last applications so I took a chance, got an interview and got enroled!

Not long after I learned about blogging and thought why not give it ago? whats the worst that could happen?? I was a little anxious but posted my first post on November 12th 2013. For a long time I was very inconsistant, what with college and everything but I realised I loved it and decided to start my own YouTube channel that is still currently very rough and ready and there are big plans for it this year but it does exsist.

A little over a year later I now have 2 blogs - one Beauty and one Lifestyle, a YouTube channel, I am now a certified MUA and I have found my passion in life that I hope to continue into a career!

This is just one of many examples that I could have given you If I had gotten a certain job - If I had stayed with a certain boyfriend - If I had went / not went to certain college.... I would never have met some people or had some experiances.

I guess what Im trying to say is that no matter how lost you feel The Universe has a plan, you are on the path, you just dont know it sometimes. I had no idea what I wanted to do with my life or who I wanted to do it with but I think day by day it becomes a little clearer.

Remember its about the journey not the destination!!


Do you believe in Universal Power?

Have you checked out my Beauty Blog - Beauty La Linda - MUA


Thank You For Reading
xox 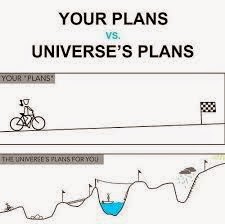